From our family to yours... 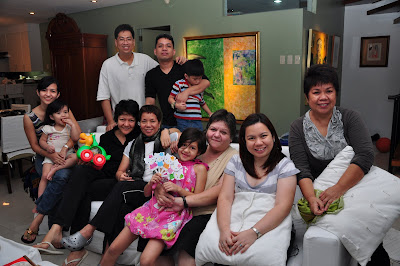 XOXO
Leica & Hubby
Posted by Leica at 10:55 PM No comments: Links to this post

Dinner at home with hubby's boss and peers, yikes!

Okay, the ultimate pressure in hosting a party at home is when the big boss is coming. I've been on edge the whole week dreaming of elaborate menus and party settings that I been squeezing my intestines in knots. It's been years since I've had a non-family party at home. Hubby was so exasperated that he said, "just make your cheesecake and be done with it. Let's just have something delivered". Instant food for a party in my home? Heaven forbid!!! I finally decided to just make stuff that I do best. Simple, homey yet special in their own way. Hubby and I hosted a small party for ten. Not too big, not too intimate, either.

Fortunately hubby's boss and peers were all down to earth and simple, geeky IT guys. I mean it in the most loving way :-) I'm also friends with their spouses so there's a lot less pressure in that aspect.

Anyway, for appetizers, I made bruschetta with cream cheese and mozarella. Of course, it was a hit. People often mistake it for something special and hard to do but really, it's the simplest appetizer. I usually serve this at home when people suddenly decide to drop by. I have a newly planted basil bush in my garden that willingly gives up a few of its leaves for such purpose. I accidentally ran over my previous bush while backing while parking the car, he he he. 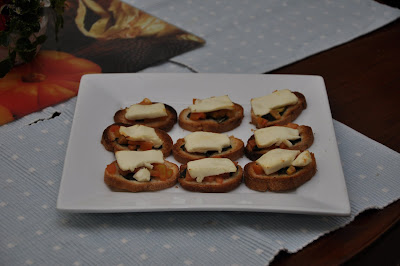 I also made a grilled prawn salad with cilantro garlic dressing. I was inspired by a salad dish that hubby and I had during our anniversary dinner at Bubba Gump that I decided to try to duplicate the dressing at home. I just made it in the fly and hope against hope that I make it right. I had no recipe anywhere, no time to research it. Well, in case you're wondering, it turned out great and just in case you're interested, here's the recipe: 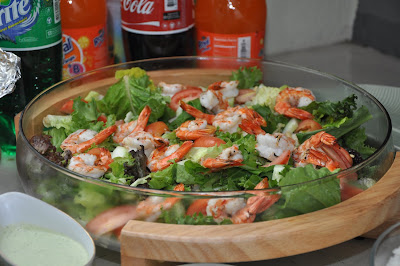 For the salad, you will need:
2 Packs slad greens (with arugula)
1 Cucumber, seeded and sliced in crescents
2-3 tomatoes, cut in wedges
1 handful of pine nuts
1/2 kilo of prawns
Salt and pepper to taste
Cilantro leaves (optional)

For the dressing:
1 cup of sour cream
1 bunch of fresh cilantro leaves and stalks
1 to 2 teaspoons of lemon juice
Salt
Freshly cracked pepper (I used a combination of red, black, white and green)

1. Clean and devein prawns, season with salt and pepper. Grill two minutes on each side. Set aside.
2. In a salad bowl, combine greens, cucumber and tomatoes and cilantro leaves. Sprinkle with pine nuts.

For the dressing, combine everything in a blender.

For our main courses, I made baked chicken with about a ton of garlic, vegetable oil, liquid seasoning, salt and pepper and baked completely covered in foil for about 4 hours hours. Yes, four hours. Remove foil at the last ten minutes of cooking. 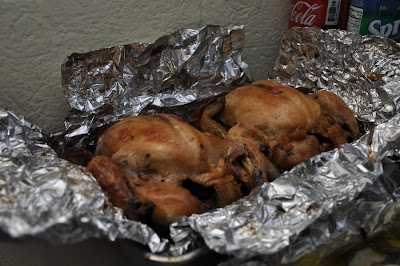 I also made fish with lime, cilantro, olive oil and butter. 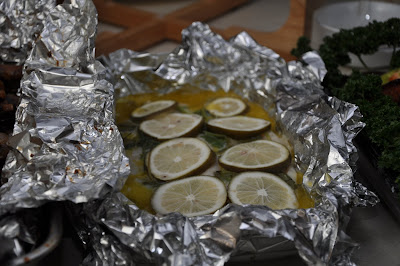 Grilled liempo marinated in about a hundred cloves of garlic, soy sauce, catsup and lots of calamansi juice. 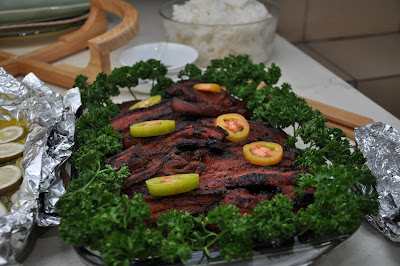 And the most requested recipe of the night, my caldereta. It doesn't look much but it was good. 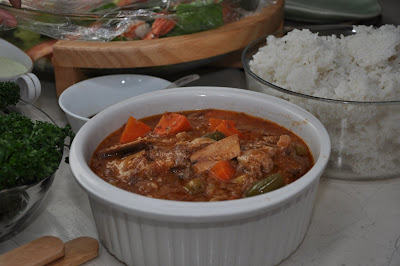 Not pictured here is the frozen fruit salad. So, I replaced that photo with Lapid's chicharon instead :-) 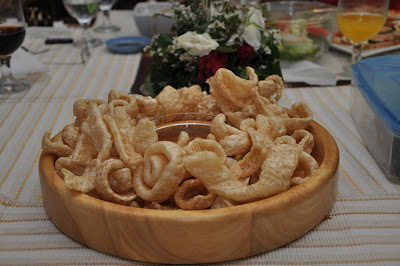 And of course, the reason why people drove all the way to my house..... my special blueberry cheesecake. 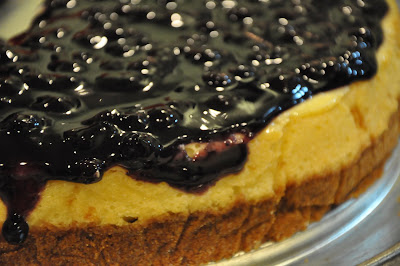 You know when you've had a successful party when:
1. People ask for your recipes.
2. People are shameless to ask to take home all the left overs.
3. People invite themselves again next time.

Our company celebrated it's annual Christmas party in style. This year the theme was Studio 54. Everyone was resquested to dress up in bell bottoms, tie dyes, afros and downright baduy wear during the era.

Moi, headmaster of it all was in charge of pretty much everything except hosting since I suck so well in that. More than the electronic fiddling in the sound sytem. Anyway, I digress.

It was such a super fun evening. The whole shebang was catered by Tamayo's. Their food wasn't exceptional but the service was impeccable. I would probably hire them again, if only for the waiters. We also had some pritson which was gone in three minutes flat. I highly recommend Charlie's pritson since they deliver the pritson to you complete with a "chef" and the condiments. A small pig that's good for 60 people will set you off P4,700 but it's well worth it. I should have ordered two. Next year, I'll order two or three, he he he.

Here are some pics from our party. It's also a lesson on what not to wear in public... he! he! he!

For Charlie's Pritson you may call +639209180625 or visit their website at www.charliespritchon.com/ 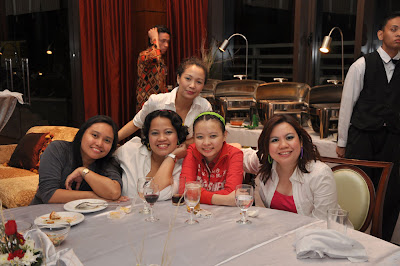 Posted by Leica at 11:15 PM No comments: Links to this post

For a change, I asked hubby to plan our evening. The best that he could come up with was...Bubba Gump. Yeah I know, quite the romantic, is he?

Anyway, he figured since we both love eating shrimp, this would be the best place. The place isn't geared for romance but the staff was friendly and courteous. We've eaten here many times before.

Here's the view from our table, a decapitated Ernie..... 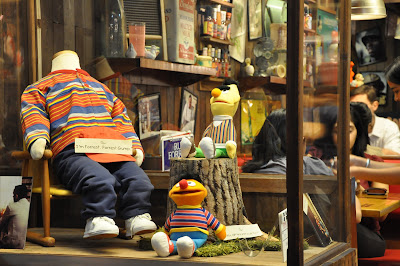 While waiting for our food, one of the waiters came over and played a little game with us. If we could answer five questions from the movie Forrest Gump correctly, we will get a prize. And what do you know? We answered all of them correctly (well, I answered four out five, hubyy got one right, he he he).

Anyway, the food wasn't bad. For starters, hubby and I ordered a Grilled Shrimp salad with cilantro garlic dressing. The dressing was great, the shrimps perfectly grilled. The dressing is worth trying to duplicate at home. 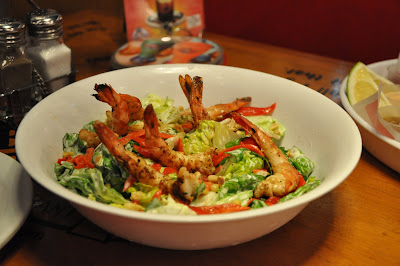 For our main course, we had the Shrimp's Heaven. Which is a combination of four shrimp dishes, breaded, coconut, sweet and sour and shrimp cakes. This dish is best shared by four persons sinece the serving is quite huge. We had plenty left over. The dish itself, on it's own is quite boring since all of them are fried, including the fries that come with it. The speckled lemonade that I ordered was perfect to remove the "sawa" factor. A speckeld lemonade is just regular lemonade with blended strawberries, nice and refreshing, although a tad sweet for my taste. 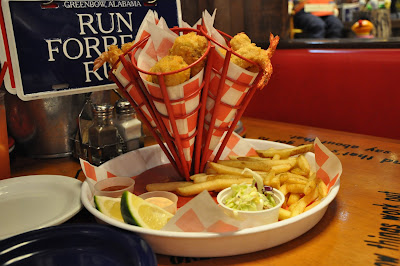 For dessert, we got free ice cream from aswering the waiter's questions correctly. Hubby gulped this down in three spoonfulls. Needless to say, I only managed to eat a small teaspoon. 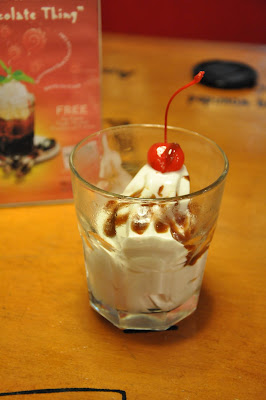 Hubby and I, old farts that we are, left at around 8:30 and promptly went home.

Overall it was a fun evening, albeit unromantic, I enjoyed myself. Afterall, I've been spending the past 14 years with hubby. 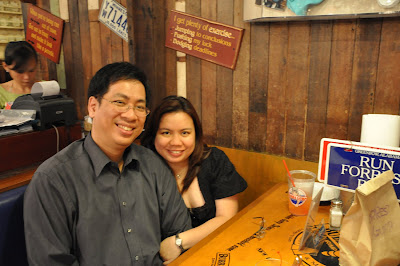 Posted by Leica at 12:03 PM No comments: Links to this post

Hubby and I are celebrating our 14th year together today :-)
Posted by Leica at 8:45 AM 2 comments: Links to this post

Oody's Noodles with my BFF

As I mentioned in a previous blog, I went out with my best friend to watch Twilight. We had an hour to kill, no pun intended :-) before the movie starts and one of the fastest places to have a decent dinner, I thought, was Oody's.

I'm not much of a noodle fan so noodle restaurants usually are low on my list and therefore don't explore them too much. Anyway, this is the first time for me to try Oody's although I've seen it a million times. So I thought, why not try it. It's fast, quick and reasonably priced.

Okay, the place is simple, quiet and comfortable enough. The interior has touches of purple and silver Christmas decorations. BFF and I start to peruse the menu and pretty much deduced that they specialize in noodles...he he he.

Anyway, we had Thai dishes. I ordered Paad Thai since the last time I had it was in Bangkok, a few months ago and I kinda miss it. 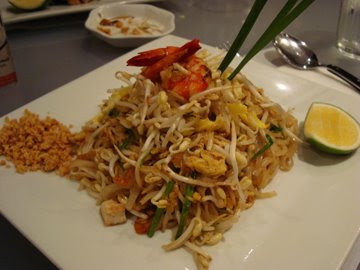 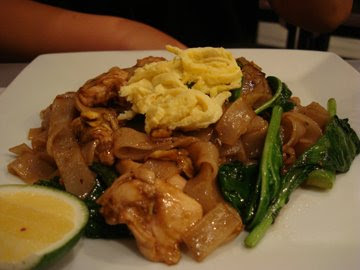 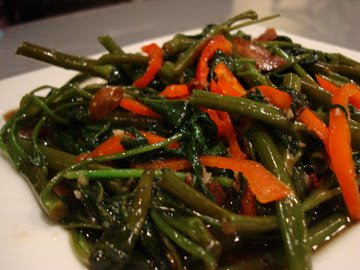 Now, to be fair, I wasn't expecting authentic Thai taste but, is it too much to ask to make the dishes not too bland? All dishes lack that certain "freshness" that you would find in a Thai dish, cilantro perhaps?

I was just so ever grateful that we only spent a little P500 for the entire thing.

Anyway, Edward Cullen more than made up for the dinner mishap :-)
Posted by Leica at 11:11 AM 1 comment: Links to this post

Hubby and I trekked to FTI last weekend to revamp our spice garden. Hubby's been requesting for some citronella planted in our garden. I've only seen it in AANI weekend market in FTI so off we went. 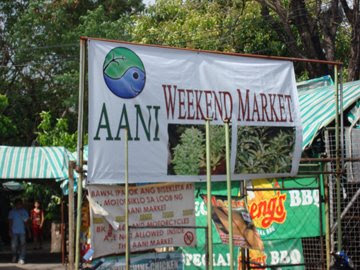 We ended up buying citronella, which looked like "talahib" than anything else but it did have such a wonderful aroma. We also purchased oregano, basil, rosemary and stevia. Stevia is an herb meant to replace sugar in your tea or coffee. Just steep a few leaves on hot water and mix in your tea or coffee. I've never tried this yet but I did taste the leaves before buying it. It was sweet and minty at the same time. Quite delicious. For more information, click here.

We also purchased some flowering tarragon (misspelled here in the photo) sold at P100/pot. I fell in love with their cute yellow flowers. 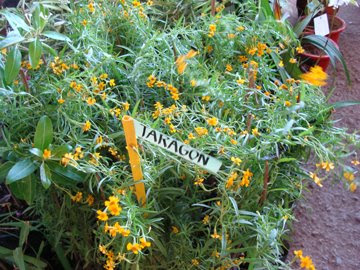 I hope my herbs and shrubs grow well in my garden!
Posted by Leica at 11:10 AM 3 comments: Links to this post 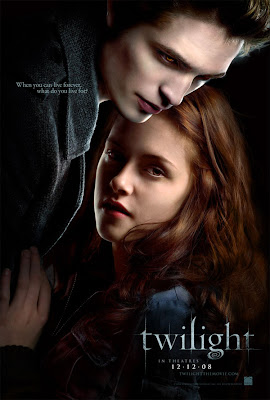 My favorite parts are when Edward told Bella:

"You don't know how long I've waited for you"

"The lion has fallen in love with the lamb"

"You are my life now"

I am officially in love with Robert Pattinson! Swoon.....

Where in the world?